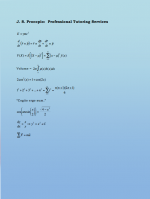 I have known from the time that I was a student in the eighth grade that I wanted to teach. Indeed, I remember well the incident that lead me to such a decision:

As a child I was somewhat … impatient. And, as fate would have it, one day in particular, I was more impatient than was usual. Mr. Plata had already asked that I not simply answer aloud the questions that he had been posing to our enrichment class in mathematics, but I could not help myself. When Mr. Plata asked what I thought to be yet another easy question, and when it seemed as though an eternity had passed, I announced the answer. Very calmly, as was his way, Mr. Plata approached me and asked whether I would prefer to teach the class… My answer, to his surprise – and perhaps to my own – was “Yes.” I actually went to the front of the classroom, and I conducted the remainder of the lesson. I did, truth be told, make a singular mistake, but I corrected myself before anyone else had the chance. After class, Mr. Plata took me aside and told me how proud he was. Thus, a teacher was born.
Shortly thereafter, I found myself tutoring mathematics and science to students of various walks in life. In fact, at the age of sixteen, I found myself tutoring a student, who was, at that time, a Senior at Le Moyne College, in the field of statistics. I went on to study mathematics and physics, first at the State University of New York College at Buffalo, and then at Syracuse University. I have, since that time, both tutored and taught for any number of institutions, including the State University of New York Institute of Technology, the University at Albany, and Colgate University. I have experience spanning more than fourteen years.

It might be of interest to note that, in addition to my love of mathematics and the natural sciences, I have always found the study of different languages to be fascinating. I have, in my time, studied, to one extent or another, the following languages: Spanish, Italian, Chinese, Latin, and Japanese. This study has, insofar as I am concerned, colored my perspective on the study of mathematics; mathematics is, at least from a certain point of view, a language in its own right. And, while I have found Latin to be the most beautiful of the spoken languages that I have studied, I find mathematics to be equally beautiful, if not more exacting.

My hope is that I will be able to share my knowledge and my enthusiasm for this subject with any number of students as I continue to tutor and teach. I am certain that a mastery of mathematics will open many doors to students, some of which may lead students to possibilities they had not even considered.